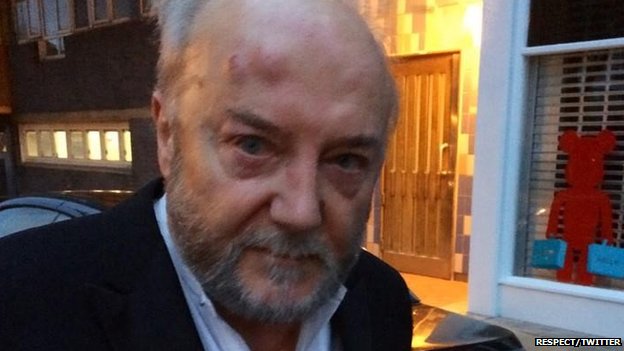 A picture, released by Respect via Twitter and taken before Mr Galloway went to hospital, shows the extent of his injuries
Continue reading the main story

George Galloway has been taken to hospital with a suspected broken jaw after he was attacked on a London street, his spokesman has said.

The Respect MP was posing for pictures with people in Golborne Road, Notting Hill, when a man allegedly set upon him. Police were quickly at the scene and arrested a man.

The MP’s spokesman said he had bruising and was in « a pretty bad shape ».

He said the alleged attacker had been shouting something about the Holocaust.

« George was posing for pictures with people and this guy just attacked him, leapt on him and started punching him, » the spokesman said.

« It appears to be connected with his comments about Israel because the guy was shouting about the Holocaust. »

Mr Galloway was interviewed under caution by police earlier this month after he made controversial comments about Israel.

The MP for Bradford West said in a speech that Bradford had been « declared an Israel-free zone » and urged people to reject all Israeli goods, services academics and tourists.

His spokesman said he did not know whether the attacker was an Israeli, an EDL-supporter, or whether he had another motive.

Hospital treatmentHe said Mr Galloway also suffered a suspected broken rib and severe bruising to the head and face in the attack, which happened on Friday evening.

The MP was taken to St Mary’s Hospital, Paddington, following the incident.

Meanwhile, a Metropolitan Police spokesman confirmed police had been called to Golborne Road at around 19:40 BST after a man was assaulted in the street.

« Officers attended. The suspect was found a short time later and stopped, » the spokesman said.

« He was arrested on suspicion of ABH (actual bodily harm) and taken to the south London police station. »

A man was arrested and cautioned in 2008 in connection with an attack against Mr Galloway.

The politician needed medical treatment after he was pelted with a rubber stress ball while campaigning in an open-top bus in London.

An earlier version of this story reported that a man had been cautioned by police and that Mr Galloway was given medical treatment without being taken to hospital. However, this was based on information about an entirely separate attack on Mr Galloway in 2008 by a different man.